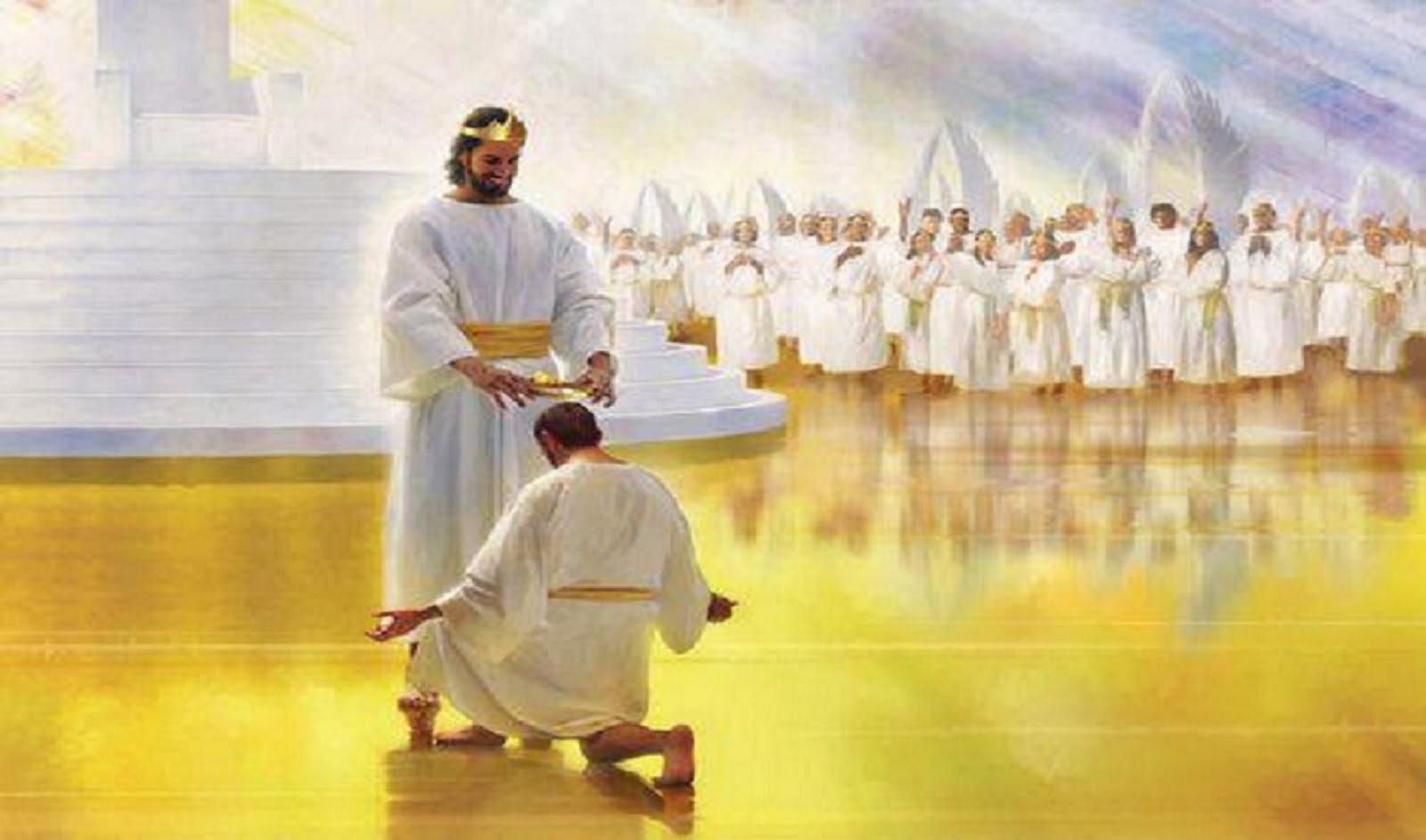 Over the past few months, I’ve been writing the 2nd exodus series detailing the 40-year journey the New Testament believers made while they waited to enter The Heavenly New Jerusalem. It’s a huge topic that has resulted in going down a few rabbit trails that have needed posts all of their own, such as:

I would encourage those of you who want to delve deeper into this subject to click on the links above.

All Israel Will Be Saved

Previously I shared how Israel had forsaken Yahweh and had to suffer the consequences by being split into 2 Kingdoms. But there were also prophetic scriptures saying that one day the two Kingdoms would be unified again and All Israel would be saved.

“and I will make them one nation in the land, on the mountains of Israel; and one king shall be king over them all; they shall no longer be two nations, nor shall they ever be divided into two kingdoms again.” ~ Ezekiel 37:22

“And the deliverer shall come for Sion’s sake, and shall turn away ungodliness from Jacob. And this shall be my covenant with them, said the Lord; My Spirit which is upon thee, and the words which I have put in thy mouth, shall never fail from thy mouth, nor from the mouth of thy seed, for the Lord has spoken it, henceforth and for ever.” ~ Isaiah 59:20 LXX

“So when they had come together, they were asking Him, saying, “Lord, is it at this time You are restoring the kingdom to Israel?” ~ Acts 1:6

Moses had insisted that the 12 tribes needed to be transformed internally, so too did Jeremiah and Ezekiel. But this internal change would only take place under the New Covenant through the workings of the Holy Spirit, as the Old Covenant law was not enough.

Jeremiah wrote about ‘the days are coming’ when a new covenant would be available to the two Houses. But notice that he also writes about ‘after those days’ and he no longer refers to two Houses but one Unified Nation of Israel.

Now Jeremiah looks forward to the Unified All Israel …

For this is the covenant that I will make with the house of Israel [the unified House of Israel] after those days, declares the Lord: I will put my law within them, and I will write it on their hearts. And I will be their God, and they shall be my people. And no longer shall each one teach his neighbor and each his brother, saying, ‘Know the Lord,’ for they shall all know me, from the least of them to the greatest, declares the Lord. For I will forgive their iniquity, and I will remember their sin no more.”~ Jeremiah 31: 31-34

“For I will take you from the nations, gather you from all the lands and bring you into your own land. Then I will sprinkle clean water on you, and you will be clean; I will cleanse you from all your filthiness and from all your idols. Moreover, I will give you a new heart and put a new spirit within you; and I will remove the heart of stone from your flesh and give you a heart of flesh. I will put My Spirit within you and cause you to walk in My statutes, and you will be careful to observe My ordinances.” ~ Ezekiel 36:24-26

And it all began to happen on that first Pentecost when Jesus sent His Helper, the Holy Spirit while He was preparing Zion, the Heavenly Jerusalem for the Saints.

Even though the Northern 10 tribes were unfaithful and the ‘guilty party’ as they broke the conditions in their first marriage covenant, they had NOT been forgotten by Yahweh. They would be allowed to remarry. Likewise, Judah would be able to remarry as her husband had been murdered.

And the Lord said to me, “Faithless Israel (~>Northern Kingdom) has proved herself more righteous than treacherous Judah. Go and proclaim these words toward the north and say,

Even Caiaphas the High Priest didn’t actually realize what he had prophesied about Jesus! He had just confirmed that prophecy would be fulfilled through Jesus’ death as those scattered abroad were from the divorced Northern Kingdom of Israel.

“And this spake he not of himself: but being high priest that year, he prophesied that Jesus should die for that nation; And NOT FOR THAT NATION ONLY, but that also he should GATHER TOGETHER IN ONE the children of God that were SCATTERED ABROAD. Then from that day forth they took counsel together for to put him to death.” ~  John 11:51-53

They would be grafted back into the Jewish tree. Under the New Covenant, believers from both Kingdoms would become All Israel as prophesied in the book of Ezekiel.

They Were The First Fruits of the wheat harvest

We would later see them listed in their tribes in Revelation 7.

“And I heard the number of the sealed, 144,000, sealed from every tribe of the sons of Israel:

But this tree would be much bigger than the two Houses, for as Paul said in Romans 9…not all who are descended from Israel belong to Israel.

Being part of Israel from now on wasn’t based on one’s ethnicity. The Gentiles would also be grafted in as the Great Commission went into all the nations across the Roman Empire. As the LXX says so beautifully, “He is the expectation of the nations”.

And Jacob called his sons, and said to them, Assemble yourselves, that I may tell you what shall happen to you in the last days…A ruler shall not fail from Juda, nor a prince from his loins, until there come the things stored up for him; and he is the expectation of nations. ~ Genesis 49:1-2, 10

But unbeknown to the prophets it wouldn’t be the physical land of Israel that they would be restored to but Zion, the Heavenly New Jerusalem with Jesus, reigning as King of Kings forever.

“…they shall be no longer two nations, and no longer divided into two kingdoms… I will make a covenant of peace with them. It shall be an everlasting covenant with them. And I will set them in their land and multiply them, and will set my sanctuary in their midst forevermore. My dwelling place shall be with them, and I will be their God, and they shall be my people. Then the nations will know that I am the Lord who sanctifies Israel, when my sanctuary is in their midst forevermore.” ~ Ezekiel 37

And that is exactly what we see written again in Revelation.

“Then I saw a new heaven and a new earth, for the first heaven and the first earth had passed away, and the sea was no more. And I saw the holy city, new Jerusalem, coming down out of heaven from God, prepared as a bride adorned for her husband. And I heard a loud voice from the throne saying, “Behold, the dwelling place of God is with man. He will dwell with them, and they will be his people, and God himself will be with them as their God.” ~ Revelation 21:1-3

The New Covenant radically changed how man could have a relationship with Yahweh through Jesus. No longer did anyone need a Jerusalem temple, a priesthood, feast days, and sacrifices. Therefore the bible writers saw it as a passing away of an ‘old world order’ and being replaced by a ‘new world order’. That is why the writers called it a New Heaven and a New Earth.

It was the ‘age to come’ that the New Testament writers were eagerly awaiting. It would be an age where there would be no more exile and where believers could enter their heavenly rest.

‘Blessed are the dead who die in the Lord from now on!’” “Yes,” says the Spirit, “so that they may rest from their labors, for their deeds follow with them.” ~ Revelation 14.

But just like Israel in the wilderness, they entered a period of 40 years as they waited for Jesus to prepare their new home at His Father’s House. However, they were perceived by the unbelieving Jews as being a Foolish Nation, when in fact unbelieving Jews were ‘the fools’.  And just as He promised, the bridegroom would return to earth and take His bride back to live with Him there forever and celebrate the marriage supper of the Lamb.

“But our citizenship is in heaven, and from it we await a Savior, the Lord Jesus Christ,” ~ Phillipians 3:20

39 These were all commended for their faith, yet none of them received what had been promised,40 since God had planned something better for us so that only together with us would they be made

Once the full number of Saints had been completed, together they received their rewards, entered The Heavenly New Jerusalem and participated in the Marriage Supper of the Lamb. They were no longer living as strangers and aliens and their exodus was over.

The New Testament IS the story about the 2nd Exodus!

Jesus through the Great Commission would lead His people out of the captivity from the Old Covenant during the 40 years between Calvary and 70AD – the end of the Old Covenant Age. He would transform their hearts and give them freedom, life, and rest in the New Covenant. In 70AD they entered the New Jerusalem, the heavenly country which was their Promised Land inheritance.

Today the gates of the New Jerusalem are never closed. Those of us who have chosen to live under the New Covenant will also one day enter that promised land, the heavenly New Jerusalem. We will be given new immortal bodies, see Jesus face to face, receive our rewards, and rejoice with those who have gone before us.

In that day, you will surely die: part 2

In that day, you will surely die: part 1

Who was Shiloh and what was the Sceptre in the Last Days?